Back to all news

Vancouver, British Columbia, August 31, 2020 – Northway Resources Corp. (TSXV:NTW) (the “Company”) and Kenorland Minerals Ltd. (“Kenorland”) jointly report the results of the second phase of Kenorland’s summer exploration program at the Frotet Project, Quebec.  Exploration work included 1,900m of drilling, a regional surface geochemical program, and an airborne magnetic survey, funded by Sumitomo Metal Mining Canada Limited (“SMMCL”). As previously announced on July 29, 2020, the Company entered into a letter of intent dated July 28, 2020 whereby the Company will acquire all of the issued and outstanding securities of Kenorland (the “Transaction”). The Company and Kenorland are continuing to progress the proposed Transaction and anticipate the execution of a definitive amalgamation agreement by mid September.

Highlights of the exploration program results include the following:

The reported exploration activities were carried out between June 16 and July 10, 2020.  The work included a diamond drill program of 1,900m over eight holes at the Regnault target area, following-up on the recently announced gold discovery made in March (press release dated July 29, 2020).  In addition to drilling, an airborne magnetic survey consisting of 373 line kilometers along with a regional till sampling program consisting of 963 B-horizon soils were completed along trend of Regnault to cover the Regnault South property, which was acquired by Kenorland in March 2020. 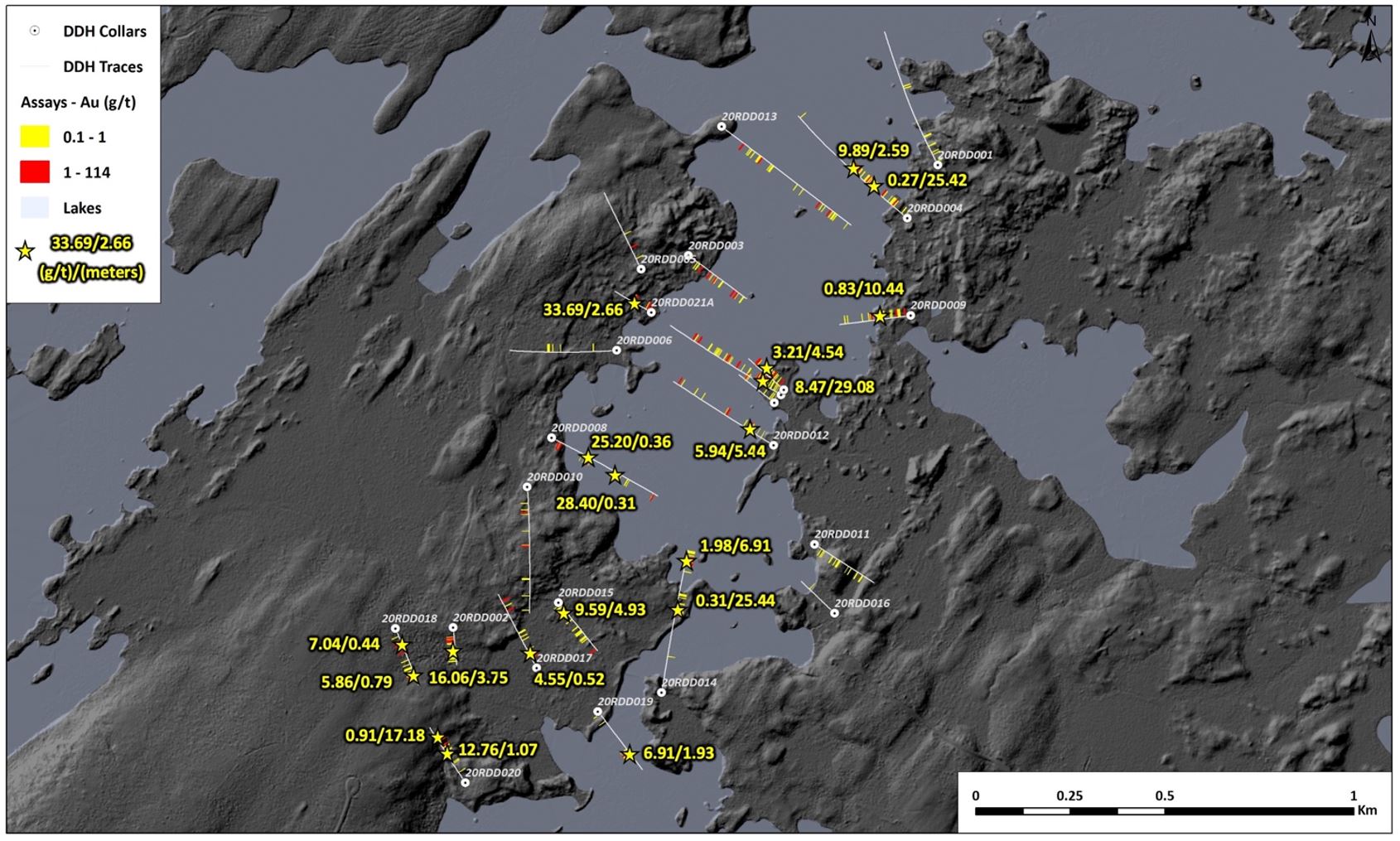 The drill program completed in July was designed to test along strike of various mineralized structures discovered in March of this year as well as test other geophysical and geochemical targets in the Regnault area.  Six of eight holes encountered notable gold mineralization.  Hole 20RDD21A, targeting a shallow chargeability anomaly, intersected  33.69 g/t over 2.66m within a newly identified mineralized structure approximately 300m to the west of 20RDD007 (previously reported 29.08m at 8.47 g/t Au).  Gold mineralization is associated with coarse pyrite and trace visible gold within quartz veining hosted within the diorite to tonalite intrusive complex.  Additionally, new mineralized structures were intersected 200m to the south of previous drilling, extending the length of the mineralized system to two kilometers remaining open to the south.

Two step-out holes were drilled to the north and south of 20RDD007 in order to test the geometry of the mineralized structure.  The northern hole, 20RDD023 intersected the structure, drilling 1.15 g/t Au over 7.69m and a second interval of 1.55 g/t Au over 10.52m.  The southern hole, 20RDD022, drilled down dip of the footwall confirming that the structure dips steeply to the northwest.  The mineralization previously encountered in 20RDD007 was associated with a near-surface chargeability anomaly.  This chargeability anomaly also dips steeply to the northwest and plunges to the southwest (Fig. 2 – cross & inclined sections).  A detailed 50m spaced induced polarization (IP) survey is planned for Q4 2020 in order to refine targets for the winter drill program.

In addition to drilling, 963 B-horizon soil samples (till substrate) were taken over the entire Regnault South property, which was acquired in March 2020.  A detailed airborne magnetic survey (50m spaced lines) was also flown over Regnault South. the Regnault intrusive complex extending a further two kilometers to the southwest of the current extent of drilling.  The geochemical survey highlights discrete areas of gold anomalism along the entire length of the interpreted intrusive complex which presents compelling additional regional targets. These regional targets are to be followed up with infill till sampling, boulder prospecting, and additional IP geophysics later in the year in preparation for the winter drill program.

Zach Flood, President and CEO of Kenorland states: “We’re thrilled to have continued exploration success at Regnault.  The short drill program completed in July was designed to test further geophysical and geochemical targets as well as test concepts of geologic controls on mineralization including orientation of gold bearing structures.  Notable gold mineralization was intersected in almost every hole of the program, including very high-grade mineralization seen in 20RDD021A, supporting our belief that Regnault represents a significant new gold discovery.  The geochemical results along trend to the south of Regnault are also very encouraging, and we now have multiple kilometers of strike to follow up on for further exploration.  We look forward to continuing to advance the Regnault discovery and the Frotet Project with our partners at Sumitomo Metal Mining.” 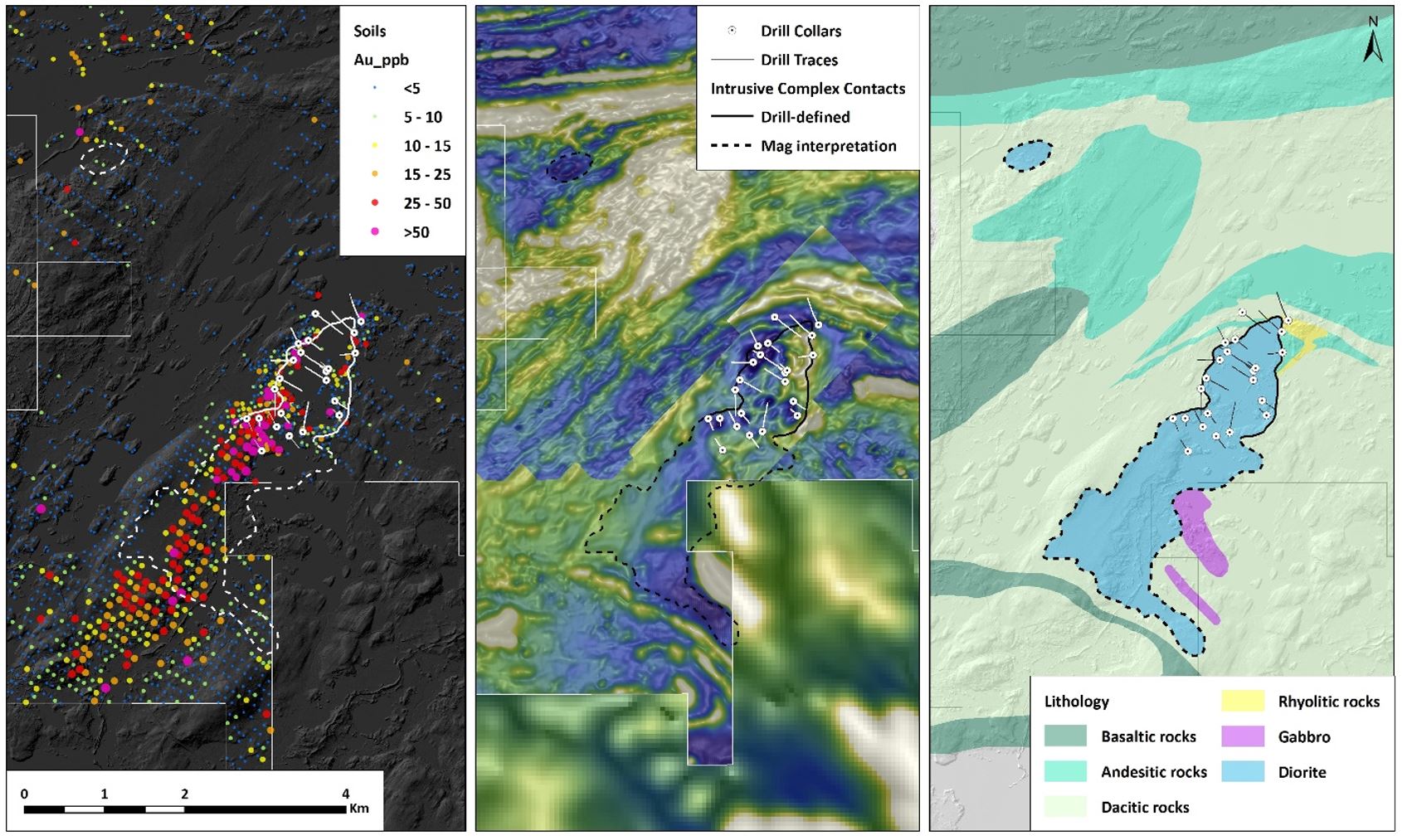 About the Frotet Project

The Frotet Project was first identified by Kenorland in 2017 after completing a regional prospectivity study over the Abitibi and Frotet-Evans Greenstone Belts. The Frotet-Evans greenstone belt hosts the Troilus Au-Cu deposit which produced  more than two million ounces of gold of and ~70,000 tons of Cu from 1996-2010 and currently contains 3.97Moz Au indicated and 1.53Moz Au inferred (Troilus Gold website) . The initial 55,921 ha property was acquired through map staking in March, 2017 and then optioned to SMMCL in April, 2018.  The two staged earn-in agreement allows SMMCL to earn 65% by funding C$4.3 million in expenditures over an initial three years.  SMMCL then has the option to earn an additional 15% (80% total) by funding another C$4 million over the following year.  Once a joint venture is formed, any party which is diluted below a 10% interest will convert their interest to a 2% uncapped net smelter royalty.

All drill core samples were collected under the supervision of Kenorland employees. Drill core was transported from the drill platform to the logging facility where it was logged, photographed, and split by diamond saw prior to being sampled. Samples were then bagged, and blanks and certified reference materials were inserted at regular intervals. Groups of samples were placed in large bags, sealed with numbered tags in order to maintain a chain-of-custody, and transported from Chibougamau to BV laboratory in Timmins, Ontario.

Sample preparation and analytical work for this drill program was carried out by Bureau Veritas Commodities, Timmins, Ontario.  Samples were prepared for analysis according to BV method PRP70-250: individual samples were crushed to 2mm and a 250g split was pulverized for analysis and then assayed for Gold. Gold in samples was analyzed by fire assay with AAS finish and over-limits re-analyzed gravimetrically. In zones with macroscopic gold the samples were first screened, and the fine fraction was fire assayed with AAS finish.  All results passed the QAQC screening at the lab, all company inserted standards and blanks returned results that were within acceptable limits.

Soil samples were collected from the B-horizon of soil developed on a till substrate.  Approximately 1 kilogram of material was collected from each sample site and shipped to Bureau Veritas (“BV”) in Timmins, Ontario for preparation.  Samples were prepared for analysis according to BV method SS230; sieve individual samples to 230 mesh (-63 microns). Samples were analyzed at BV in Vancouver, British Columbia with BV method AQ252_EXT; 30 grams of material digested in aqua regia with an ICP-MS finish.

Trading in the Company’s shares has been halted as of July 24, 2020 and will remain halted pending the satisfaction of all applicable requirements pursuant to Policy 5.2 of the TSX-V.Trading Halt

Thomas Hawkins, P.Geo. (OGQ #2200), geologist, Vice President, Exploration of Kenorland Minerals Ltd., Qualified Person under NI 43- 101 on standards of disclosure for mineral projects, has reviewed and approved the technical content of this release.

This news release contains certain “forward looking statements” including, for example, statements relating to the completion of the Transaction and the Resulting Issuer’s exploration plans.  Such forward-looking statements involve risks and uncertainties, both known and unknown.  The results or events depicted in these forward-looking statements may differ materially from actual results or events.  In addition to other factors and assumptions which may be identified herein, assumptions have been made regarding and are implicit in, among other things: receipt of regulatory approvals, the Company’s ability to complete the Transaction, the state of the capital markets, the impact of the COVID-19 pandemic, the ability of the Resulting Issuer to successfully manage the risks inherent in pursuing business opportunities in the mining industry, and the ability of the Resulting Issuer to obtain qualified staff, equipment and services in a timely and cost efficient manner to develop its business.  Any forward-looking statement reflects information available to the Company as of the date of this news release and, except as may be required by applicable securities laws, the Company disclaims any intent or obligation to update any forward-looking statement, whether as a result of new information, future events or results or otherwise.

On behalf of the Board of Directors

All information contained in this news release relating to Kenorland was provided by Kenorland to the Company for inclusion herein. The Company has not independently verified such information and shall bear no liability for any misrepresentation contained therein.Completion of the Transaction is subject to a number of conditions, including but not limited to, TSX-V acceptance and if applicable pursuant to TSX-V requirements, disinterested shareholder approval. Where applicable, the Transaction cannot close until the required shareholder approval is obtained. There can be no assurance that the Transaction will be completed as proposed or at all.Investors are cautioned that, except as disclosed in the management information circular or filing statement to be prepared in connection with the Transaction, any information released or received with respect to the Transaction may not be accurate or complete and should not be relied upon. Trading in the securities of the Company should be considered highly speculative.The TSX-V has in no way passed upon the merits of the Transaction and has neither approved nor disapproved the contents of this news release.

Kenorland Minerals intersects 33.69 g/t Au over 2.66m at Regnault
Back to news page