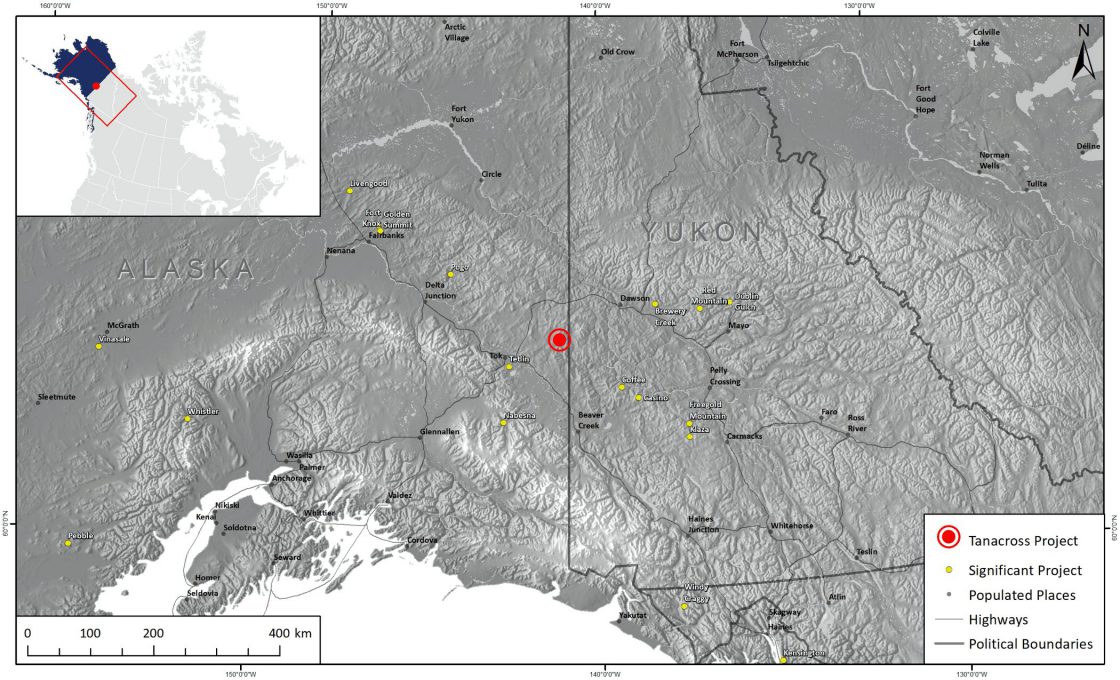 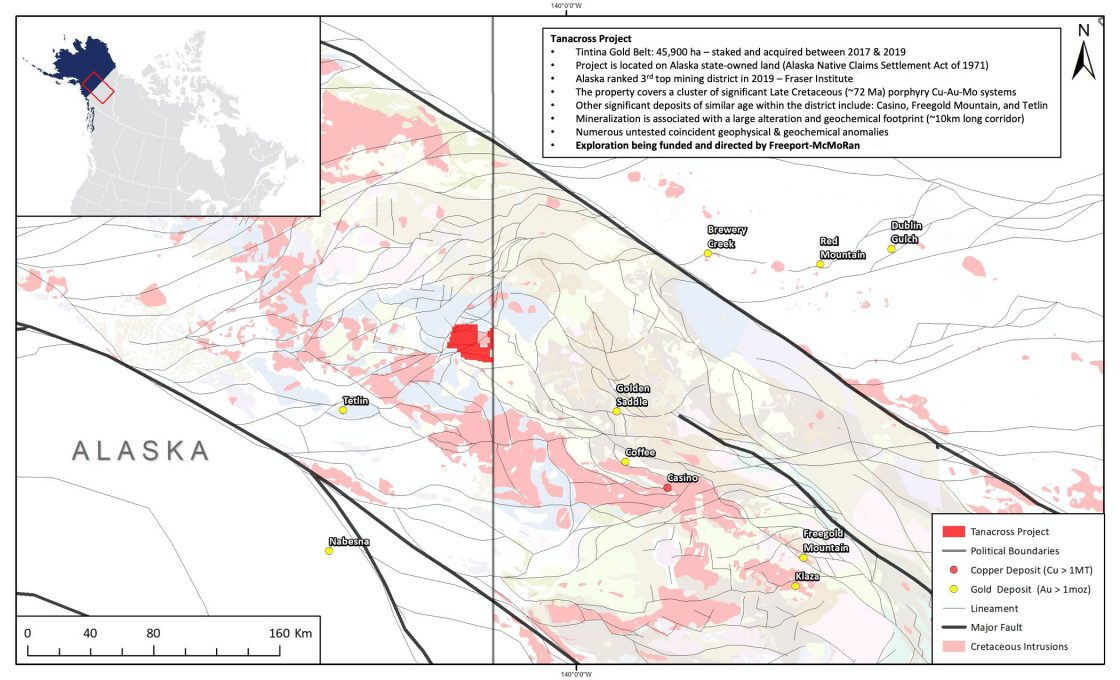 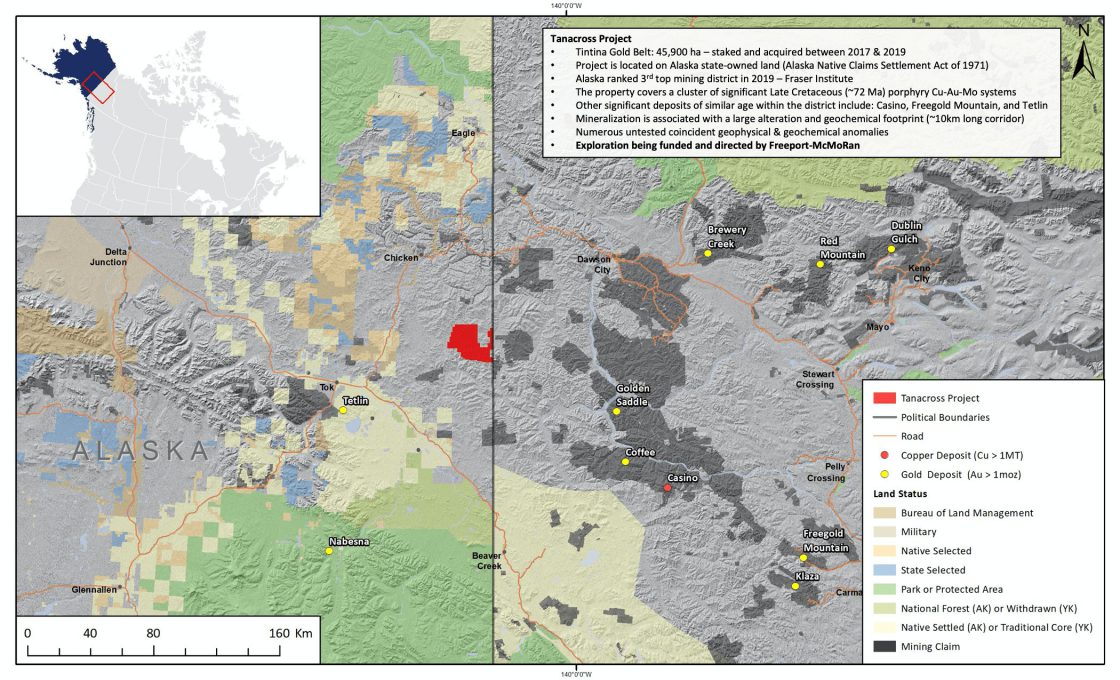 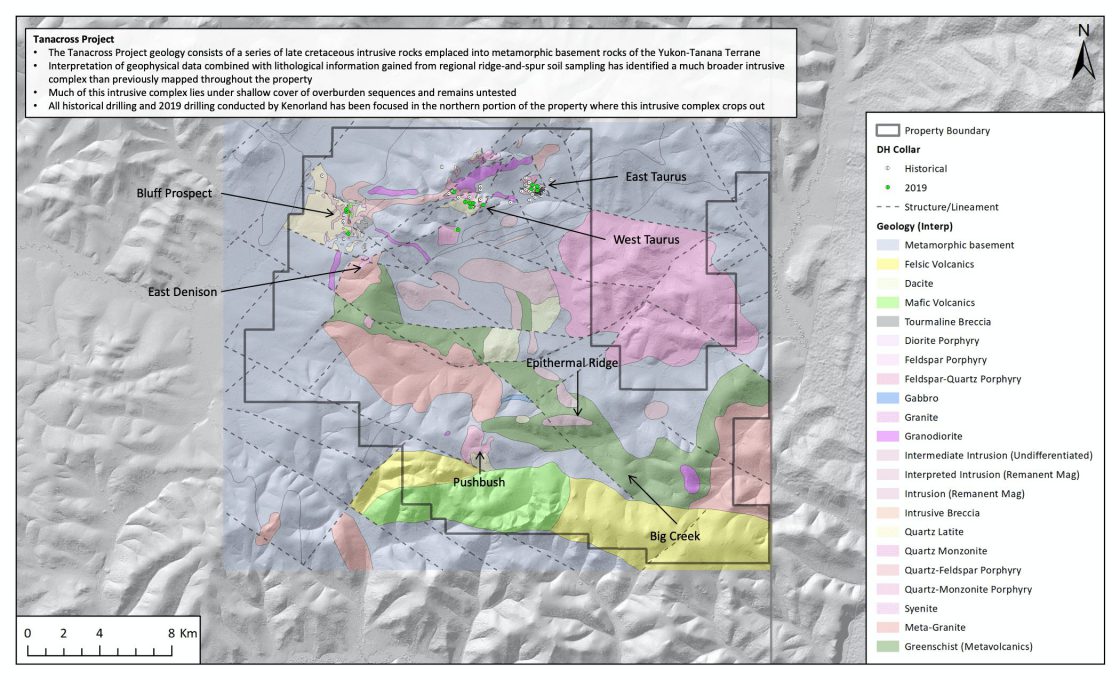 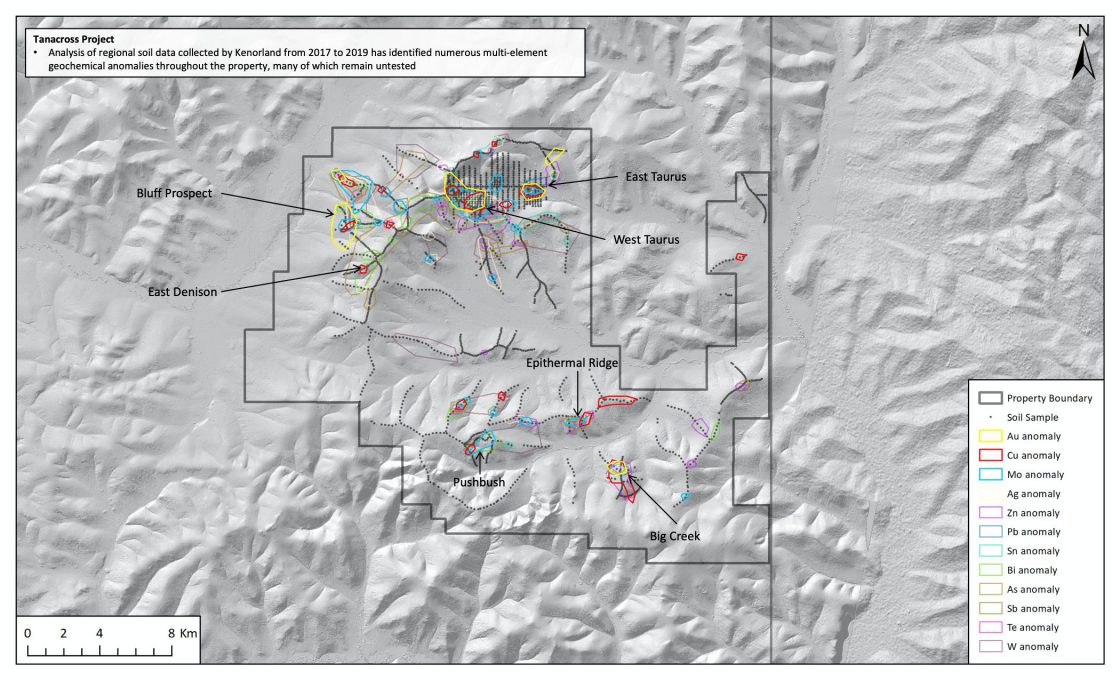 The Tanacross Project consists of 45,900 Ha of prospective ground in the Yukon-Tanana Terrane, which hosts the Casino porphyry Cu-Mo-Au deposit and the Coffee & Pogo orogenic Au deposits. The property covers exposures of porphyry style mineralization and has significant potential to host large porphyry systems and various other styles of mineralization.

The Project is located 80 kilometers northeast of Tok, Alaska. Summer access to the property is either by helicopter or by fixed wing air-craft to gravel airstrips located at the East Taurus, West Taurus and Bluff prospects. A twenty four person semi-permanent camp is located next to the 540 meter (1,770 ft) air strip at West Taurus. There are numerous trails throughout the prospects within the northern portion of the property, which are connected to an approximately 70-kilometer winter access route from the Taylor Highway to the west.

The geology of the Tanacross quadrangle is dominated by middle to upper Paleozoic metamorphic rocks of the Yukon-Tanana terrane, which have been intruded by Mesozoic to Tertiary granitoids. The Tanacross Project is located at the intersection between two major, terrane-scale structures: the NW trending, arc-parallel Big Creek Fault system and the NE trending, arc-perpendicular Sixtymile-Pika Fault system. The project is underlain by regional magnetic anomaly identified from upward-continuation of magnetic data, suggesting the presence of a large buried batholith responsible for the clustering of porphyry systems at surface. Several high-level porphyry occurrences have been mapped across the property concentrated along a ridge where rock crops out, including the Taurus Cu-Mo-Au porphyry deposit. The majority of the property is covered by residual soils and vegetation, concealing multiple additional targets with similar signatures to areas of known mineralization identified through regional soil sampling and interpretation of geophysical data.

Copper-molybdenum mineralization was first discovered in the area in 1970 by International Minerals and Chemicals Corp which led to the discovery of the Taurus Cu-Mo-Au porphyry system. The USGS conducted regional stream sediment sampling for the Tanacross quadrangle in the mid 1970’s, stimulating exploration activity within the vicinity of the project area. Subsequent exploration programs focused on additional stream sediment and soil sampling and geologic mapping, identifying several porphyry Cu-Mo and banded Pb-Zn-Ag-Au prospects. In general, follow-up was limited to shallow drilling on a number of these prospects, with the exception of the Taurus system which has seen several drill campaigns (100% owned by Senator Minerals US Inc.: inferred resource of 68.3 million tonnes @ 0.275% Cu, 0.032% Mo and 0.166 g/t Au; April 2011 Technical Report).

The majority of the Tanacross project was acquired through physical staking in February, 2017. In June, 2017 Kenorland acquired the Taurus Claims from a private owner, which cover the East Taurus and West Taurus Cu-Mo-Au porphyry prospects. In the summer of 2017 Kenorland geologists conducted a property-wide, ridge and spur soil sampling program. In the summer of 2018, Freeport-McMoRan funded additional ridge and spur soil sampling in prospective areas as follow up to the 2017 program. In the summer of 2019, a property-wide helicopter borne ZTEM / aeromagnetic survey was flown in order to identify geophysical expressions of buried porphyry bodies. In summer of 2019 a 9057 m diamond drill program was completed targeting known porphyry mineralization and geochemical anomalism. Additional drill testing of buried geophysical targets is warranted as follow-up to the 2019 ZTEM survey.