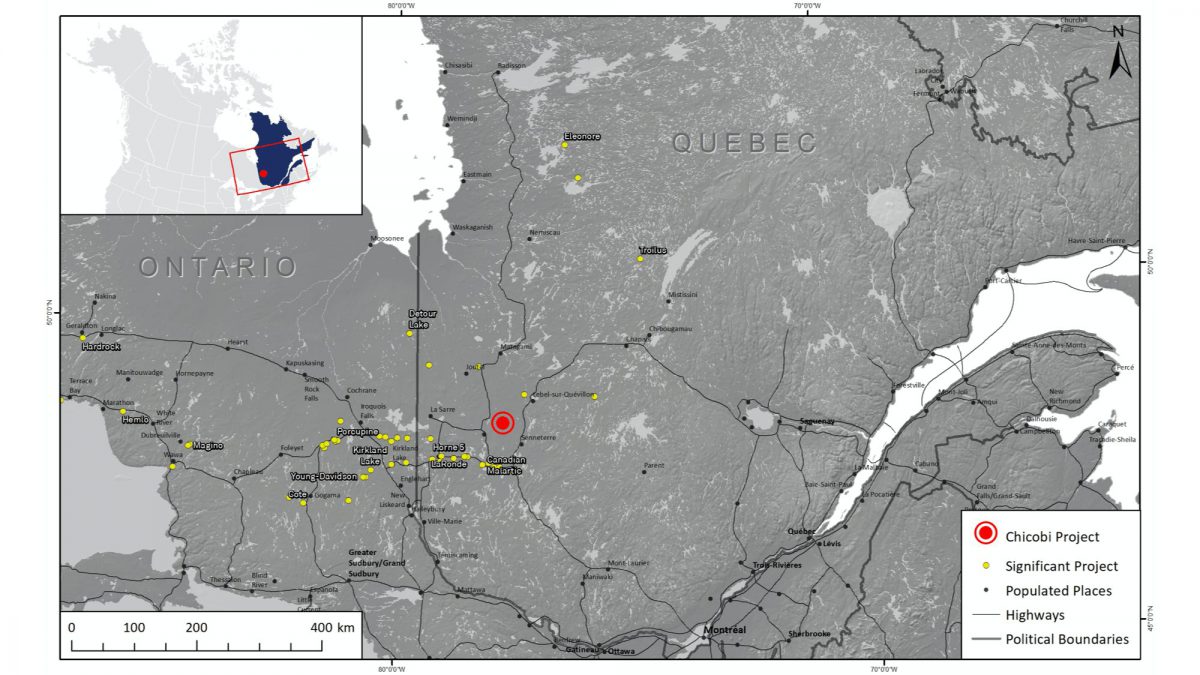 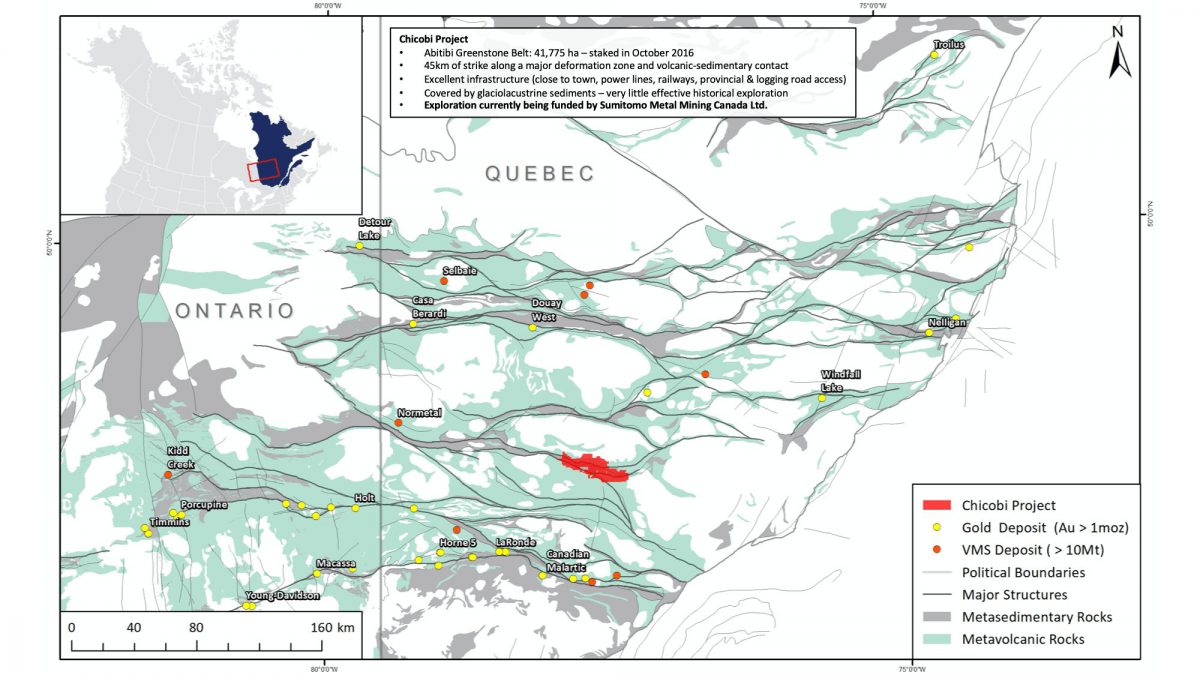 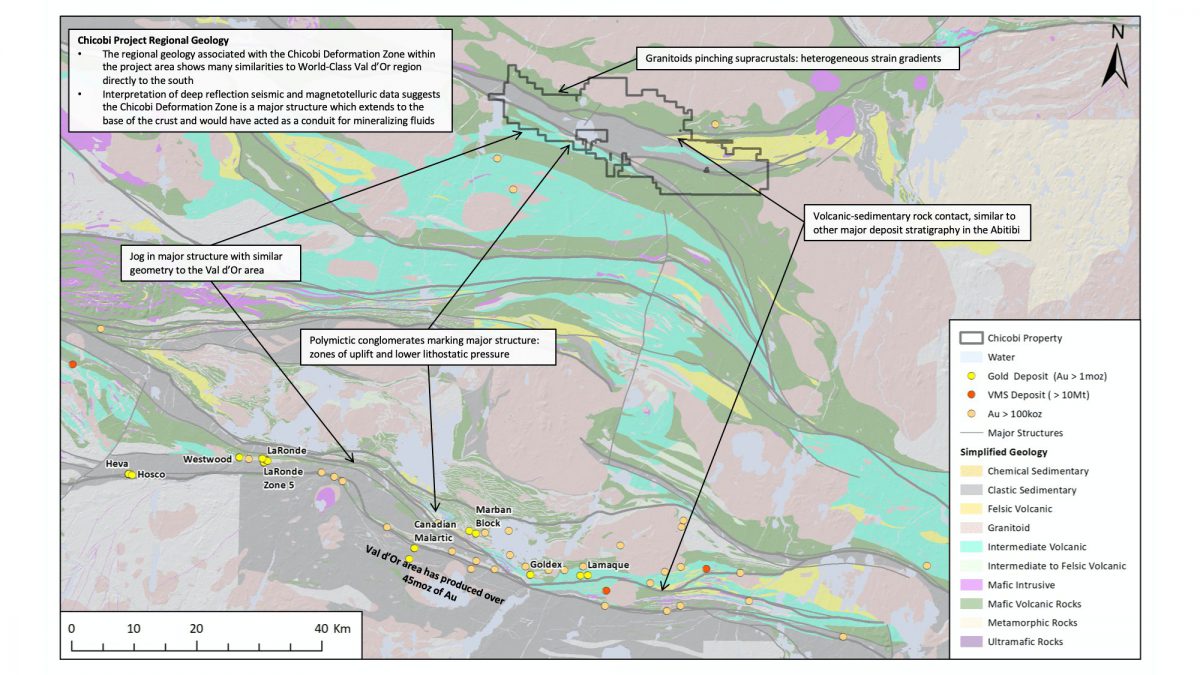 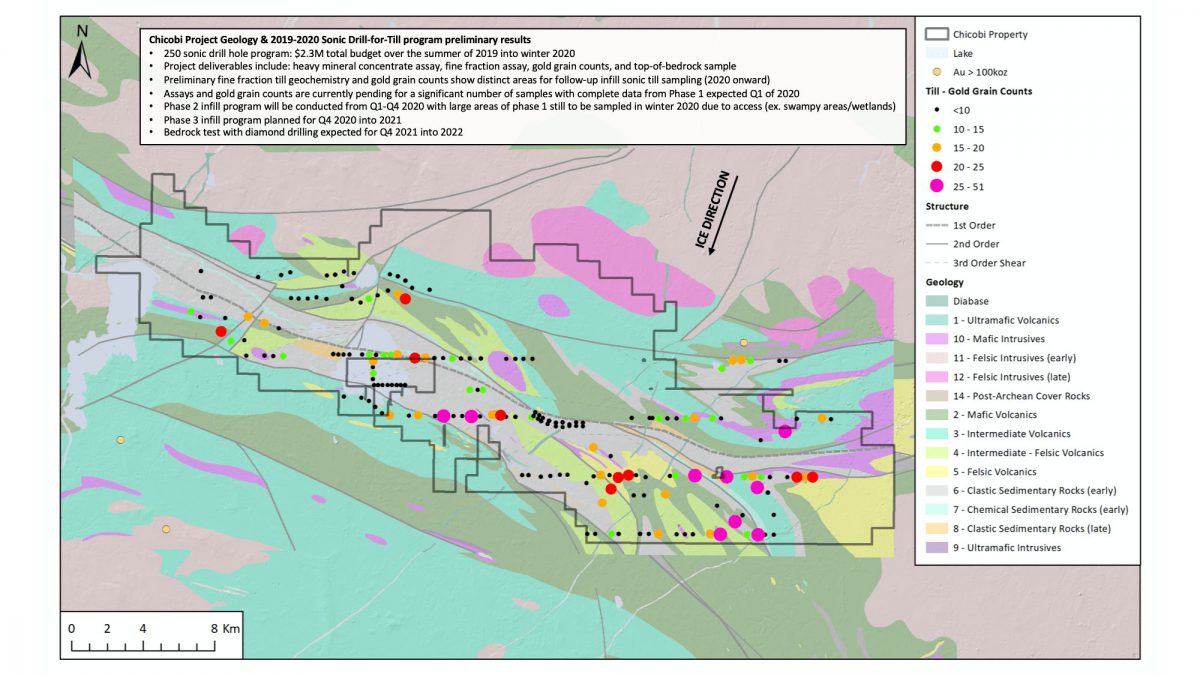 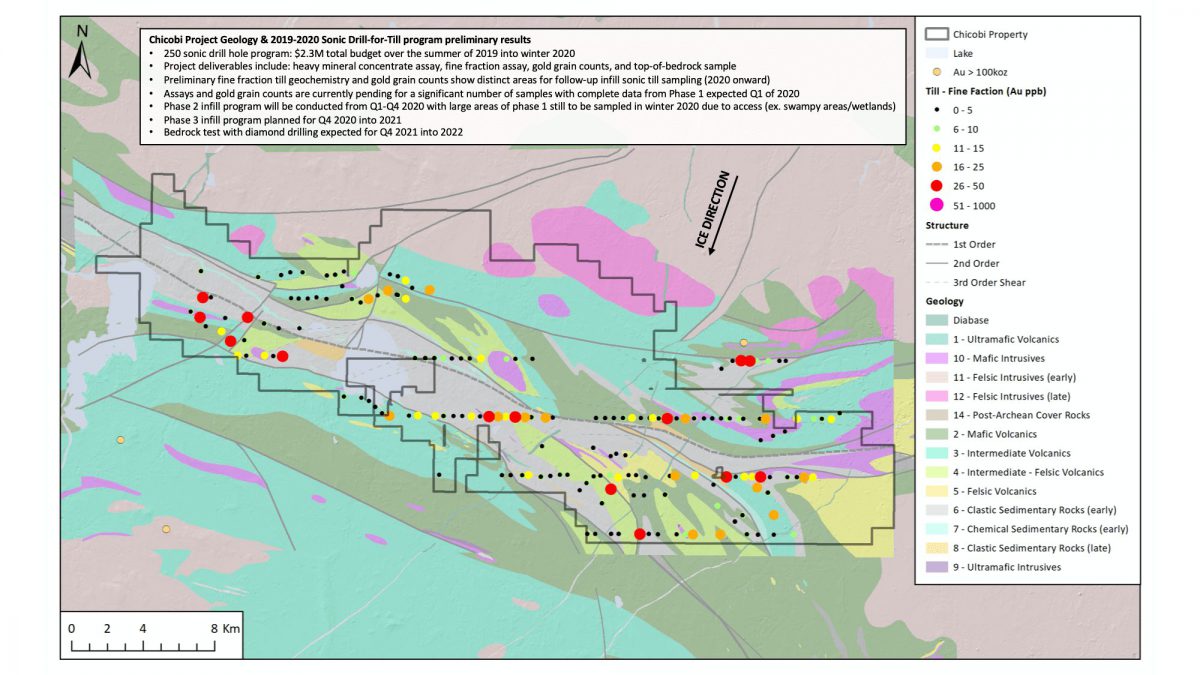 The Chicobi Project covers 41,775 ha and over 45 kilometers of strike along the Chicobi Deformation Zone (CDZ), a major, yet under-explored structural break transecting the Abitibi greenstone belt of Ontario and Quebec. The CDZ is analogous to the other major breaks hosting world-class Au deposits of the Abitibi, such as the Cadillac-Larder Lake, Casa-Berardi, and Sunday Lake – Lower Detour deformation zones, and has the potential to host significant orogenic gold and VMS mineralization.

The project is located 30 kilometers northeast of the town of Amos, Quebec. Infrastructure in the vicinity is excellent with a road network throughout the project area providing easy access. Power transmissions lines and a railway also cross through the property.

The CDZ is a laterally extensive feature, which spans over 400km across the Abitibi greenstone belt. Reflection seismic and magnetotelluric (MT) studies suggest the CDZ could represent the surface expression of a crustal-scale to trans-lithospheric structure, which would have acted as a conduit for mineralizing fluids. The stratigraphy along the CDZ consists of volcanic rocks of the Kidd-Munro and Stoughton-Roquemaure Assemblages, which have been structurally juxtaposed against clastic sediments and iron formations of the Porcupine Assemblage. Extensive polymictic conglomerates occur along the structural corridor of the CDZ, which are analogous to other late-basin sedimentary rocks spatially associated with mineralized systems elsewhere in the Abitibi (i.e. Timiskaming, Opemisca). The crustal architecture of the CDZ combined with favorable lithological constraints places the Chicobi Project in an optimal setting to host significant orogenic gold and VMS mineralization.

In general, the CDZ has seen far less exploration than the other major deformation zones throughout the Abitibi. The majority of historic exploration conducted throughout Kenorland’s claim package consisted of targeting conductive bodies identified from airborne electromagnetic surveys (INPUT) in the 1970’s and 1980’s. Although gold and base-metal mineralization was discovered during these early campaigns, the area has seen very little follow-up exploration largely due to the challenges related to extensive quaternary cover sequences. Significant occurrences associated with the CDZ include the Destiny gold deposit, which occurs seven kilometers north of the Chicobi Project as well as known VMS systems directly adjacent to the property. The Normetal mine, which is also spatially associated with the CDZ, occurs near the Quebec-Ontario border. Kenorland views these as a positive indications that this structural corridor is fertile as it has seen auriferous fluid flow and contains prospective volcanic assemblages for VMS mineralization.

The Chicobi Project was acquired by Kenorland through map staking in October, 2016 and was optioned to NX Gold in April, 2017. NX Gold completed a 2D crustal-scale reflection and refraction seismic survey and an airborne VTEM-magnetic survey in 2017-2018. Kenorland received 100% of the property back after NX Gold terminated the option agreement in May 2018. In the summer of 2019, Sumitomo Metal Mining Canada Ltd. (SMMCL) funded a 230 hole sonic drilling program targeting glacial till that lies beneath ~10m of glaciolacustrine clay that covers much of the Abitibi Greenstone Belt. Sonic drill holes were drilled along existing access corridors on an approximate 3.2km x 500m grid and averaged 16m in depth. A complete section of the glacial stratigraphy was collected as well as a top of bedrock sample. Glacial till samples were sent for several different analyses: fine-fraction geochemistry, gold grain counts, heavy mineral concentrate assays, and hyperspectral analysis on pebbles. All top of bedrock samples were sent for lithogeochemical and assay analyses. An additional 120 sonic drill hole program is being completed in the winter of 2020 infilling to an approximate 800m x 500m grid in areas of elevated gold anomalism discovered the 2019 sonic drill till sampling program.